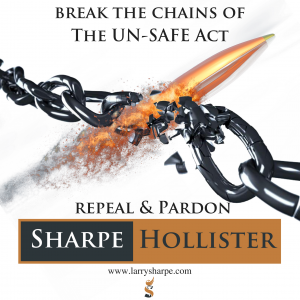 “Unfortunately, in the state of New York, the second amendment has now become the second suggestion.”
– Larry Sharpe

These three actions will make the Safe Act essentially obsolete by 2019 and set it up for a full repeal by 2020.

1) The risk of turning good people into hardened criminals just because of a Safe Act violation is a serious problem.
2) Law enforcement officers and prosecutors will make enforcement and prosecution of the safe act its absolute lowest priority.
3) Any attempts to fund or support the Safe act through further legislative measures will be vetoed.

These three points insure that law abiding citizens can be responsible for their own safety, while still combating criminal behavior and acts of violence.

1) If an individual legally obtained and owns a firearm they may transport it anywhere in the state of New York as long as it is locked and unloaded. This includes reciprocity for out of state travelers who have permits in their own states.
2) If a firearm is used to stop a crime, regardless of the local laws, the individual can not be prosecuted for the gun crime.
3) Everyone has a personal right and responsibility to protect their families, communities and businesses, this includes members of the LGBTQ and minority communities whose second amendment rights are threatened.

The key point is to keep regulation of the 2nd amendment within the bounds of the Constitution, while ensuring the state and local government do not put any undue burden on citizens who are trying to lawfully abide by permit regulations. To do this, we will eliminate the current six-month permit waiting period.

1) The new permit waiting period will be 90 days.
2) If the system fails to make a choice, one way or the other, the permit is granted automatically.
3) If the county does not approve a permit there must be a reason provided and the decision is able to be appealed.