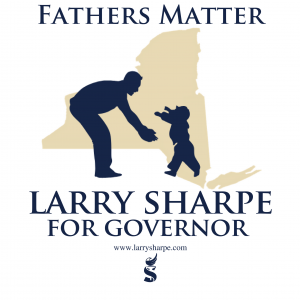 –
“The courts must make every effort to do what’s best in the interest of EVERYONE.” – Larry Sharpe “Family law in New York is an absolute disaster. It is destroying the lives of children, fathers and often entire families by limiting the father’s rights, due to the errant focus of the courts.” – Larry Sharpe
–

–
The first problems to be addressed regarding family law are issues perpetuated by the family courts. Judges must stop treating family court as an end point for families, and instead regard it as the most important component of the overall judicial system. The results of balanced family courts will reap positive effects for New York that will spill over into other aspects of society, including criminal law. 1) Implementing and effectively enforcing perjury laws will help stop the damaging lies that are common to family court. The threat of secondary prosecution for perjury will help the process reveal the party actually in the wrong. 2) The focus of the courts, and all of the players in the family law system, needs to be redirected from dollars to keeping families together. Allowing children to remain with kin during these difficult processes is an honorable goal that has the potential to reduce costs, both financially for the state and emotionally for the children. A strong, family-centered legal process is the goal. 3) Specific concerns brought forth during the litigation and mediation process must be viewed in an appropriate context. Would this be an issue or expectation of the parents if they were still married?
–

The Problem with Penalizing Parents

–
We absolutely must re-evaluate the expectations of the courts as well as the penalties for not adhering to the demands made. 1) The financial obligations of each parent should be subject to the same level of interference in family court, as it is outside of family court. For example, the requirement of a divorced parent to pay for their child’s college. If the couple were still married, there is no expectation that they must pay for their child’s education. Parents should be given the right to determine how to best care for and finance their child’s needs without the interference of the courts. 2) Trying to force parents to adhere to their income potential for child support instead of their actual earned income is incredibly unfair. Due to the time investment necessary for good parenting, mothers and fathers must be able to work and still be a part of the child’s life. The current system does not encourage this and it must be changed. 3) The practice of removing any of a father’s various state issued licenses is wrong. Putting them in jail or fining them is equally counterproductive and, while it benefits the court and state, it decimates the extended family, especially the children. Instead, we need a ledger system that will put the offender on a payment plan so they may support the family accordingly. Debtor’s prison needs to end in New York.
–
–
Share via
Facebook
Twitter
LinkedIn
Mix
Email
Print
Copy Link
Powered by Social Snap
Copy link
CopyCopied
Powered by Social Snap