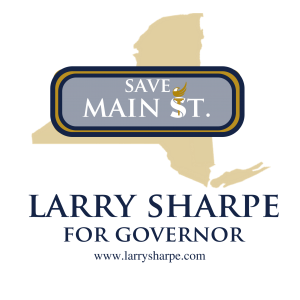 “Government is taking the time to make it as hard as possible to have that small business.” – Larry Sharpe

“Small business regulations and taxes can be transformed into a positive influence on entrepreneurship with one word: simplification.” – Larry Sharpe

1) One of our top priorities is to lower the cost of healthcare which will help keep small businesses’ employment expenses down. They will be able to improve the economy through increased hiring and also have greater potential to grow and thrive alongside larger businesses and corporations.

2) Worker’s compensation laws must be overhauled. While it is critical that these protections for workers not be diminished in any way, we are introducing a plan that integrates elements of worker’s compensation programs from around the country in order to lower the costs associated with this program. We will also allow a high-deductible worker’s compensation plan which allows the employer to pay out of pocket until their deductible is reached. Any business choosing this option must still provide proof of their ability to pay. We will make it impossible for an employer to neglect their accident and injury compensation responsibilities

3) Repeal the scaffold law which stifles construction companies. These outdated laws were put in place prior to the worker’s compensation program which has provided an alternative option for managing these types of regulations.

4) We must quit placing so many restrictions on new and developing industries including vape shops, hemp / marijuana businesses and cryptocurrency and instead allow them to innovate and flourish.

5). To encourage small businesses to help with rehabilitation of felons after they’ve been released from prison, employers will receive payroll tax waivers for these individuals during the first two years of their employment. The returns to taxpayers are two fold because we are encouraging economic growth for this population of individuals, as well as reducing the likelihood of them returning to prison (recidivism).

6) Many of the occupational licenses required by the government do very little to actually improve the quality or safety of the work being performed. Any licensing requirements for goods and services people would generally be comfortable asking someone they know to provide or perform should be repealed. This will make it easier for small businesses to hire capable people, which will in turn make it easier for these individuals to climb out of poverty without having to pay to simply to feed their family.

7) The government should not raise the tipped minimum wage. A recent attempt in Maine led to the discovery that this measure actually hurts the total compensation of waiters and waitresses. Ultimately, the backlash from restaurant workers was so strong that the legislature repealed it.